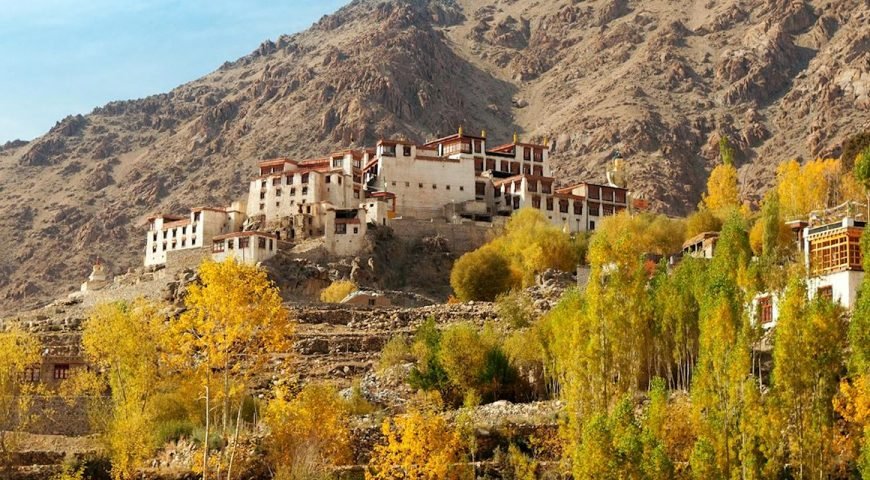 Alchi, at an altitude of 3,120 meters, has one of the oldest temples in the Ladakh region. It is situated by the banks of the Indus river on the way from Leh to Kargil at about 70 kms from Leh. It is mainly known for its magnificent and well-preserved 11th or 12th-century wall paintings, all in Indo-Himalayan style.

Alchi, unlike other monasteries in the region, is located on flat land rather than up a steep hill or mountain. According to various researchers, this ancient monastery was constructed by Guru Rinchen Zangpo between 958 and 1055 AD.

The monastery is huge and is divided into three shines à Sum Tsek, Dukhang, & Temple of Manjushri.

One of the most beautiful monuments of the monastery complex, the main purpose of building Sum Tsek is still unclear. It is three stories tall & constructed using natural stone and loam. The building has beautiful woodwork columns, walls, facades, clay paintings, & images that were created by Kashmiri artists.

Dukhang is the monastery’s assembly hall and is used by the monks as a prayer room. The authorities have retained the original wooden door. You can see six different mandalas drawn on the walls as a tribute to Panch Tathagatas.

The temple, also known as Jampe Lhakhang, was constructed in 1225 AD. Unfortunately, the temple isn’t well preserved but you can still see the original elaborately-decorated wooden door. Four Manjushri images are painted on four walls of the temple in bright orange color.

Other places to visit in Alchi

Where to Stay in Alchi Village

Most people prefer to visit Alchi Village on a day trip. That is you start from Leh early in the morning and visit Alchi while covering some other nearby places like Magnetic Hill, Gurudwara Patthar Sahib, and Indus Zanskar Rivers Confluence. But if you had some time in hand, we highly recommend staying for a night in Alchi.

Accommodation in Alchi Village is very basic and simple but will definitely be comfortable and warm enough. Alchi is at a lower altitude than Leh. To avoid altitude sickness, it can also be a great place to spend your first night after landing in Leh.